Getting Fired From the WTE — and Revving Up for Another Ride

Editor’s Note: For those who’ve wondered about why I don’t run in the WTE any longer, read the rant below. Afterwards, I decided to take an extended writing break and focus on other things for awhile.

Now, however, the vacation’s up and it’s time to get back to work. Former WTE Executive Editor D.  Reed Eckhardt and I have teamed up together to launch a new blogsite, “Truth to Power” at www.bulldogwithteeth.blogspot.com, and this rant was my first contribution. (Yes, Reed and I hatched the blog idea together, but let’s give credit where it’s due: Reed first proposed it and Reed does all the work. I’m just there, basically, to fill the right-winger chair for liberty, individualism and capitalism (since it seems to be decidedly empty).)

Reed and I both want the blog to represent a diversity of opinion and to serve as a clearinghouse for comments on local society and government, and we want readers of all types to find at least a few things of interest there. I seriously believe that “Truth to Power” is shaping up to fulfill that objective — again, with many thanks to Reed and his hard work. Go check it out for yourself!

I’ll get around to fixing the other references I need to update on other portions of this blog over the next few days — and you, Dear Readers, can expect regular posts both here and at “Truth to Power” from this point forward, on a relatively weekly basis at minimum. So sit down, strap in and hang on for the ride! — BTH — 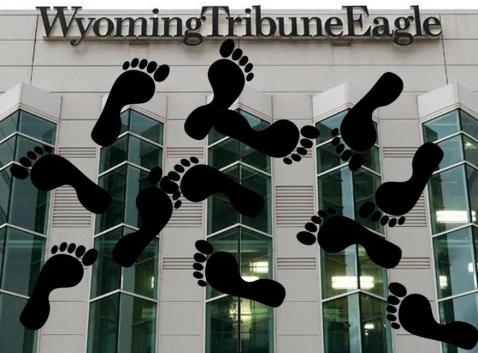 So, for those few of you Dear Readers out there who may have noticed my absence from the editorial pages of the “Wyoming Tribune Eagle” since last September, the explanation is quite  simple: I got fired.

Well, “fired” might not be the best word to use, as I was never an actual paid employee of the WTE — simply a free-lance commentator. But I was certainly told by Managing Editor Brian Martin, in a phone call a couple of days after my last WTE rant ran back on Sept. 2, 2018, that my words were no longer desired for WTE publication.

When I asked Brian about the reason for the termination, all he would tell me was that he had received a “large” number of complaints about my most recently-published columns, through both phone calls and email … And that, as a consequence, the item came up to a vote by the WTE’s Editorial Board. A vote which I lost.

“Did I misquote somebody, or get my facts wrong?” I asked Brian after he conveyed that information.

“No, nothing like that,” he said. “No one challenged your facts. They just basically expressed that they were tired of what you have to say.”

“No problem, Brian,” I told him. “If the WTE is not interested in my columns any longer, then that’s your right, as a private company, to make that choice.”

More than one person suggested to me, in the weeks immediately following the WTE’s decision, that by refusing to run my column in their newspaper any longer, the WTE was interfering with my First Amendment rights.

Sorry, but — while I appreciate the sentiments, I’d respectfully disagree. The First Amendment guarantees that we cannot be persecuted by government for our statements or beliefs — it does not mean that we have to be provided with newspaper commentary space, bull-horns or university lecterns by those who disagree with our views, nor does it mean we’re above being challenged on our statements. It means: Freedom from government persecution. PERIOD!! As a privately-owned company, the WTE can run anyone’s opinion as it sees fit … Or not. Finis. End of story. The “Big 30.”

Just because I’d never legally challenge the WTE’s right to run whatever commentary swill they find palatable, however, doesn’t mean that I don’t have thoughts about how those selections are made — nor does it take much imagination to figure out what actually happened behind the scenes regarding my weekly rants.

Consider, to begin with, as anyone who has ever read me regularly can attest to, that the fundamental thrust of all my columns has always been to combat government overreach, waste and ineptitude wherever it might be found, as well as to challenge government’s unconstitutional involvement in  the myriad sectors of our society and economy best left, in both reason and morality, to the workings of the free market.

Then, let’s add to the mix the fact that the most often-frequented target for my  exposés was: The “economic development” schemes always being hatched, presented and engineered by local “leaders,” whether they be attempts to force county taxpayers to fund “Children’s Museums” (shot down in 2016), for example, or the corporate-“welfare” handouts distributed by the Wyoming Business Council.

Such adventures are always cast in the light of “development” for our economy (“We created 13 jobs with this subsidy!”), but none of the proponents of such schemes ever tell us how they intend on producing wealth by stealing it first. Nor do they ever bother to explain the role in actual wealth-creation those forcibly-extracted tax dollars would have played had they been left alone to do their work in the private sector instead.

Then, let’s also point out that I spent most of the summer of 2018 beating up on all the political hacks running for the Wyoming governorship on the Republican ticket, most of whom claimed to be “free-market conservatives”  but most of whom were receiving a taxpayer-funded handout of one kind or another instead (such as now-Governor Mark Gordon’s USDA farm subsidies for his Merlin Ranch, for instance).

So, roll it all up together and what do you get? A lot of people, with both political and economic interests in maintaining and expanding government control over such “economic development” boondoggles, who wanted me to SHUT UP. Yep, I’m quite sure that the local “Good ‘Ole Boy Network” was “tired of what I had to say” alright!

So, do I have to be a fly on the wall to figure it out? No, at least a few of the GOBN got together, obviously, and decided to launch a complaint campaign against me. And, given the WTE’s spine status as that of a wet noodle, once such a “large” number of complaints were received, the WTE acted to excise my opinions from their pages.

Notice that no one bothered to actually pen a commentary themselves and refute, publicly, the facts I’ve always pointed out about such fascistic “economic development” schemes (schemes the WTE generally support editorially, by the way). No, that would require work, consistency and integrity, and the fascists would much rather simply shut me down instead.

(Sidebar: Remember, Dear Readers, that “fascism” is actually a precisely-defined word, not just a generalized name to call someone and hurl about, and what it actually means is: “a governmental system with strong centralized power, permitting no opposition or criticism, controlling all affairs of the nation (industrial, commercial, etc.) …”

Observe that Mussolini and the rest of his Italian fascists did NOT nationalize factories or advocate the abolition of private property … They merely controlled such property instead, manipulating the marketplace for their own ends with handouts to their boot-licking cronies and further controls on their enemies — and all of it paid for by prior plunderings of the productive members of the population they ruled.

So, to the extent to which our local “leaders” advocate the same type of “economic development” schemes for the same reasons, and act to fund them in exactly the same manner — well, then, they qualify as “fascists” as well.)

Well, to Brian Martin and the rest of the WTE’s Editorial Board, as well as the “economic development” fascists who decided they couldn’t tolerate my opinions any longer: Yes, you can silence my voice in the WTE, but that doesn’t alter the facts of reality by one atom or erg of energy. Your schemes still conflict with what’s real. You can’t take money you haven’t got from people at the point of a gun, then hand it out to your cronies, and then call that “economic growth.”

Even more telling, however, is the fact that instead of rebutting the charges I’ve made repeatedly over the years, which you are all apparently unable to do — you have simply sought to gag me instead. Operating on the epistemology of savages, who don’t worry about what they don’t see right in front of them, you people seem to think that muzzling my public voice means muzzling the facts of reality as well. Sorry, but that’s not the way the world operates; blank-outs never work.

Nor, speaking strictly now to the Editorial Board of the WTE, does your cave-to-so-called-public-opinion approach speak well for your journalistic integrity: Whatever happened to objectively analyzing the facts? Or to acting out on the media’s role as a watchdog over out-of-control government’s constant meddling in our lives? Rather than challenging such practices, you advocate and encourage them instead.

No, instead of courageously acting on such principles, you WTE folks prefer to declare that they don’t exist, or are irrelevant in our lives. When you could have stepped up to the plate and actually done your job, you chose to allow public opinion polls to become the barometer of your soul — a soul which now, in the words of Ayn Rand, is little more than a “shapeless piece of clay stamped by footprints going in all directions” (“Philosophy and Sense of Life,” 1966).

The WTE constantly claims that it supports a “diversity of viewpoints,” but firing me makes the reality clear: That “diversity” only occurs within the framework of the mixed-economy systems so prevalent in the United States today. Challenge that model, Dear Readers, and you’re in big trouble down at the WTE.

The surprise, quite frankly, is that I was allowed to rant in the WTE as long as I did. I’ve always known my approach to socio-politico-economic issues has flown in the face of both conventional “wisdom” and WTE editorial philosophy, so whatever run I was ever able to get away with was “good to go” with me … And I’ve always known that that ride would be cut off eventually.

Neither the Editorial Board of the WTE nor the local “economic development” fascists control this blog, however, so, Dear Readers, be on notice that — after a much-needed break — we’re about set to resume our exposés on government graft, manipulation and corruption. And you can just call that “doing the job the local news media refuses to do.” Are you people ready for another ride??

Bradley Harrington is a computer technician and a writer who lives in Cheyenne. He blogs at www.reignitinglibertystorch.com. Email:  bradhgt1776@gmail.com.

NOTE: This column was originally published on the “Truth to Power” blog on June 20,  2019, under the title of “Local Newspaper Tried to Gag Me. It Won’t Work.”