UW Weapons: Let’s Get Rid of Vehicles and Knives, Too

“Whenever governments mean to invade the rights and liberties of the people, they always attempt to destroy the militia, in order to raise an army upon their ruins.” — Elbridge Gerry, “First Annals of Congress,” 1789 — 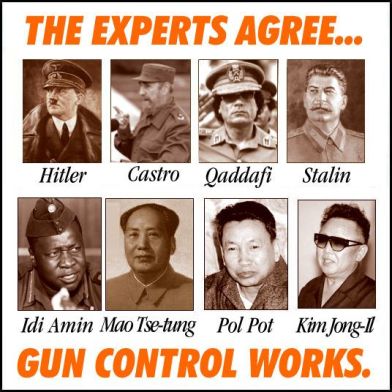 As a general rule, I ignore the columns of Rodger McDaniel, as they simply aren’t worth the powder it takes to blow them apart.

Once in a while, however, he’s so outrageous that wasting some good powder looks preferable to allowing his nonsense to propagate itself unchallenged.

Nonsense like this, for instance: “Old Laramie was the scene of a poor re-enactment of the ‘Gunfight at the OK Corral’ last weekend … Like the 1957 movie, it involved outlaws packing heat and challenging the law …” (“GOP protest of UW’s gun policy was shameful,” WTE, April 29.)

And the actual event McDaniel is hyperbolizing? No, it wasn’t an armed shootout at Hoyt Hall, but … Some Republicans, present for the GOP’s state convention at the University of Wyoming, deciding it was high time to contest the university’s inane ban on a citizen’s right to carry instead.

Dare to stand up and protest for your SECOND Amendment rights, however, and it’s now a “shameful demonstration of disrespect for the state’s one university” — as if our rights are determined by the number of universities we have.

So, McDaniel: What makes it OK for you to violate private property rights and be proud of it, while anyone who contests a bogus UW gun regulation meriting nothing but abolition, gets little more than epithets such as “increasingly extreme,” “far-right” and “radical” hurled at them? Just out of curiosity, when was the last time you labeled yourself as “far-left” or as a “double-standard mongerer”?

Never one to pay much attention to the facts, however, McDaniel merely continues, quoting the UW regulation itself: “No dangerous weapon may be stored or carried in or upon university facilities. Any person carrying a dangerous weapon in a university facility is required to relinquish the weapon to the UW Police Department voluntarily or upon request.” (“UW Regulation 2-178, Section VI, Clause D.”) This, according to McDaniel, is “crystal clear and imminently reasonable.”

Really, McDaniel? That all depends on just how one defines a “dangerous weapon,” doesn’t it? When that weapon is a GUN, it suits your purposes of disarmament just fine — but what about when someone else defines it as a Ryder van, and then mows down 26 people with it, killing 10, as happened in Toronto just two weeks ago?

Or, how about when somebody else gets it in their thick skull to define it as a knife instead, and then kills 19 people with it, as happened in Sagamihara, Japan back in 2016?

In those cases, McDaniel, by your “crystal clear” logic, shouldn’t all vehicles and knives be banned as “dangerous weapons,” too?

And, if so, then how am I supposed to even drive onto the UW campus, much less find a place to park, since that’s now “weapon storage”? And shouldn’t I also be handing my pocketknife and nail clippers over to the UW police as well?

Which makes me wonder, McDaniel: Where does it end? After all, objects such as banjos, microwaves, socks, frying pans, fireplace pokers, pickle jars and dumbbells can — and have — been used as murder weapons before (“The most unusual murder weapons ever used,” “Ranker,” undated story). Indeed, in one truly bizarre instance, the victim was pummeled to death with a loaf of pumpernickel bread.

Shucks, for that matter, McDaniel, even a person’s bare hands and feet, for a martial arts expert, can be used to kill. So, by your lights, wouldn’t it now be “imminently reasonable” to have the UW police strip everybody down and tie them all up until they’ve been interrogated as to their karate classification, and whether or not they’ve strangled anybody with their socks lately?

And I guess that’ll be the end of any future UW bake sales, too — at least for any kind of bread approaching the hardness of pumpernickel.

In the real world, however, and especially under American jurisprudence, most of the rest of us understand that we don’t hold some people responsible for the actions of others. Something that you, McDaniel, having “practiced law for 25 years,” should have been able to grasp decades ago.

NOTE: This column was originally published in the Wyoming Tribune Eagle on May 6, 2018. Here is this column’s original downloadable PDF file.