Even Blind Squirrels Trip on Acorns Every Now and Then

Posted on February 8, 2018 by Bradley Harrington

“What is prudence in the conduct of every private family can scarce be folly in that of a great kingdom.” — Adam Smith, “The Wealth of Nations,” 1776 — 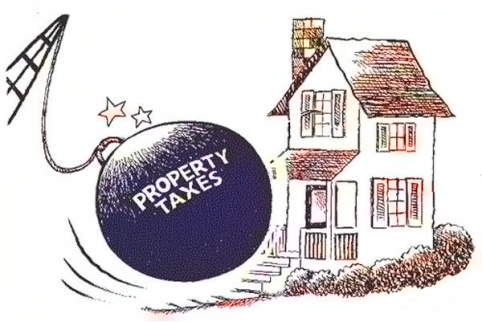 It isn’t often that our state legislators get it right, but  — in the fashion of the proverbial blind squirrel that trips on an acorn every now and then —  it DOES happen occasionally:

“After nearly a year of work, Wyoming lawmakers let controversial sales and property tax proposals die silent deaths in less than a minute Wednesday … It was something of an anticlimactic end for the four bills that would increase taxes in an attempt to diversify the state’s revenue streams.” (“Legislative committee won’t sponsor property, sales, tourism, tax bills,” WTE, Feb. 1.)

As tax-increase bills for Wyoming, every one of these bills greatly deserved the deaths doled out to them. One of them in particular, however, really merited a good skewering: The property tax increase bill, which would have raised property taxes on residential property in Wyoming from 9.5 percent to 11.5 percent.

While this might seem to be a “slight” increase of only 2 percent, don’t be fooled by that hype. As Cathy Ide of the Wyoming chapter of “Campaign For Liberty” put it recently, that would actually by a property tax increase of 21 percent instead.

How’s that again? Ide explains, and her explanation warrants a detailed look.

And, once you take the difference between these two figures and divide it by the original, you get: “An increase of $476.64 — a whopping 21 percent increase in your property taxes!” (“Action needed to stop Wyoming property tax increase,” Cathy Ide email, Jan. 24.)

Neat trick, huh? Upon doing a little bit of calculator work myself, I was able to determine that this 21 percent increase would have applied to ALL homes with that mill rate, regardless of their value … So … Goodbye and good riddance!

Despite the fact that the Joint Revenue Committee exercised good judgment in whacking this tax trash, however, there’s still a few concerns to discuss, as the news story makes it clear that at least two people on that committee don’t get it after all:

“With Wyoming tapping into savings, drawing down the balance while there’s less going in, Revenue Committee co-chairman Sen. Ray Peterson, R-Cowley, said the state will need to take diversifying its revenue streams seriously. ‘One person asked me down here Monday night, when are we going to get serious about addressing our shortfalls and revenue streams in Wyoming,’ he said. ‘I said, ‘I’m convinced it will be when we have no savings left.’ ‘When we’re broke,’ Madden [co-chairman Mike Madden, R-Buffalo] added.”

Really, gentlemen? In case you haven’t noticed, we’re ALREADY BROKE, we have been for quite a while now, and I can’t help but wonder when you two are going to figure that one out: You’re $800 million in the hole for the biennium, and looking at spending a good chunk of a paltry “rainy day” savings that doesn’t even equal what Wyoming receives from the Feds every single year (about 34 percent of its budget, or well over $2 billion annually).

And the Feds, the magic fount of those transferred dollars? Why, they make Wyoming look positively benign in comparison, with $20 trillion in debt and $112 trillion in unfunded liabilities. What are you gentlemen going to do — and whose wallets are you going to look to be raiding — when that “revenue stream” ends up in the bit bucket, as it inevitably must?

So, in the interests of true fiscal responsibility and integrity, legislators, here’s a plan that’s guaranteed to get us out of this mess: CUT SPENDING!

Just in case you didn’t catch that, let me repeat myself: CUT SPENDING!

Instead of taking that tack, however, all you two can think of is plundering the Wyoming taxpayers on an ever-wider scale. So, here’s my recommendation for this year’s legislative session: Instead of tripping over more acorns, how about tripping over a budget ax instead?

NOTE: This column was originally published in the Wyoming Tribune Eagle on February 4, 2018. Here is this column’s original downloadable PDF file.