The American Revolution: “The Liberation of the Human Mind”

Posted on November 14, 2017 by Bradley Harrington

“What built this country … Is business. But business thrives in what kind of environment? In an environment where it’s left alone.” — Yaron Brook, “Wyoming Business Alliance Speech,” Nov. 8, 2017 — 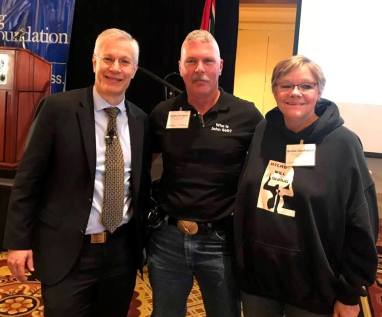 It isn’t often that Wyoming’s intelligentsia gets inoculated with a healthy dose of  laissez-faire-style liberty and individualism, but — in the person of Yaron Brook, Executive Director of the Ayn Rand Institute — that’s exactly what they got last Wednesday [Nov. 8]. Given our current political and economic climate, it couldn’t have happened at a better time.

Nor did Brook, the keynote speaker for the Wyoming Business Alliance’s “Dynamics of Change” conference held at Little America this week, mince words or waste time, getting right to the point:

“No system in human history has done more to benefit mankind — to bring us out of poverty, to create a fantastic standard of living — than capitalism has,” he told several hundred people at the event. “So, I want to talk about the benefits of greater freedom, greater capitalism and the greater adoption of markets, rather than growing government as the solution to every problem we face.”

“300 years ago,” Brook asked, “before the establishment of this great country, what were people’s average incomes? What did they make? What was the average level of wealth of society?”

“The United Nations,” he said, “defines extreme poverty as making under $3 a day. And yet, if you look at the population of Europe and the United States, before there was a United States in the 18th century, what percentage of the population was making less  day? About 95 percent. Almost everybody was extremely poor, by any definition, 300 years ago.”
“Indeed,” Brook continued, “if you look at wealth and income for the last 10,000 years, it is amazing how stable it is. For 10,000 years, human beings have made about, or under, $3 a day. And yet, something miraculous happened: We went from this flat curve, and suddenly everything went up through the roof … And suddenly, look at us — we’re rich. Everybody in this wonderful country is rich, by the standard of $3 a day. How did that happen?”

With thanks to two events, as Brook explained, both occurring in 1776: The Declaration of Independence, which he defined as “the most important political event in human history” — and the publication of “The Wealth of Nations” by Adam Smith, “the first popular book of economics articulating the case for why markets work.”

“There’s a direct connection between the Industrial Revolution and the founding of America,” Brook continued. “It’s not an accident that they both happened about the same time … Who did your life belong to, before the Revolution? The king, the tribal leader, society … But, for the first time in history, the American Founders declared that your life belongs to you.”

With those declarations, Brook said, and by getting government out of our lives, the creation of the United States laid the politico-economic foundations for all of the innovation and wealth-creation that was soon to follow.

“And that,” Brook stated, “explains the prosperity we have in the world today … When you give people the freedom to produce, anywhere in the world, they build civilization … The American Revolution liberated the human mind.”

By providing several other historical examples, such as Hong Kong, Brook pounded the point home: Wherever people are left alone to be free and to deal with both the positive and negative consequences of their actions, skyscrapers rise where before there was little more than bare rock.

“Where does the human mind function best? When it’s free,” Brook said. “Fewer authorities, fewer regulations, fewer controls … Freedom from being told what you can and cannot do … We’ve lost that sense of imagination, of what’s possible for human beings.”

Nor did Brook fail to resurrect the morality of wealth-creation from its current sorry state, as he addressed the business people in the room: “What is making money reflective of?” he asked. “The creation of values … Values that other people value, at a greater amount than what it costs you to produce … You, as businessmen, are making the world a better place every time you make a profit.” You could have heard a pin drop.

By applying the lessons of the American Revolution to our current political and economic woes, Brook succeeded in changing the entire terms of the debate: Instead of discussing ways to grow government, he challenged us to consider unlimited government as the main problem.

And that, Dear Readers, is exactly where that debate needs to be.

NOTE: This column was originally published in the Wyoming Tribune Eagle on November 12, 2017. Here is this column’s original downloadable PDF file.