“Doin’ 90 Miles an Hour Down a Dead-End Street”

Posted on September 27, 2017 by Bradley Harrington

“Instead of stopping when we could we went right on / Until suddenly we found the brakes were gone / As a bad motorcycle with the devil in the seat / Doin’ 90 miles an hour down a dead-end street.” — Hank Snow, “90 Miles an Hour,” “The Best of Hank Snow,” 1966 — 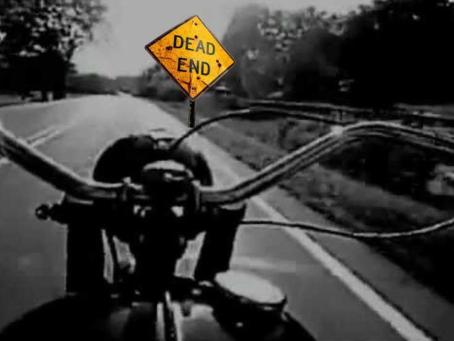 Anyone who knows me at all knows that I don’t shriek alarms for the fun of it. This one’s been a long time coming, however, and — just like the farmers on the slopes of Mt. Vesuvius who ignored their mountain’s ominous rumblings — we now teeter on the precipice of financial, social and political disaster.

■ On the local/municipal level, according to the Wyoming Association of Municipalities’ latest report, it’s clear that that EVERY SINGLE ONE of our 99 municipalities now find themselves dependent on state funds to one degree or another (Appendix A, Table 2);

■ Nor does it stop there, for this quote makes it equally obvious that our cities and towns are beholden to the Feds as well: “The matching grant funds would be gone for much needed upkeep and improvements; like grants from EPA … Forestry and USDA” (Dubois Mayor Twila Blakeman, Page 14);

■ On the county level, we’re in the same dire straits. Here in Laramie County, for instance, “intergovernmental transfers” (NOT counting sales, use or severance taxes, just federal grants and other government funds) totaled out at over $16 million for FY 2014 (the last year that “intergovernmental transfers” were even listed as such in the budget). With spending that year of $82 million, therefore, that financial folly rang in at 19.5 percent;

■ And how about Wyoming itself? Disgustingly, we’re also in arrears up to our eyebrows to the Feds: For FY 2014, Wyoming’s budgetary income from that source clocked in at a whopping 35.2 percent;

■ Wyoming’s federal “education” monies, in particular, comprise most of those “free” federal dollars — and what’s going to happen when they start heading for the bit bucket, as they eventually must and have already begun to do? Wyoming Superintendent Jillian Balow recently stated that her “hand is hovering over the panic button as proposed cuts to federal funding could have a direct negative impact on students’ education” (“Wyoming teacher training at risk of losing funding,” WTE, Sept. 20). With all due respect, Ms. Balow, with that kind of beholdenness, that’s a panic button we should have slammed both our fists down on 30 years ago;

So, in short: ALL local Wyoming governments are heavily dependent upon both state and federal dollars — and the state, in its turn, is massively in hock to the Feds, too.

So, how about our federal government, the final backstop for all of this “intergovernmental” largess, the fount for all of these dollars? How are THEY doing? As of this writing, the figures on www.usdebtclock.org are, rounded down: National debt, $20 trillion; federal budget deficit, $689 billion; other unfunded federal liabilities, $107 trillion. Total: $127.69 trillion.

In other words, Dear Readers, WE’RE BROKE, and have been for decades. We’re now standing in a hole that’s $127 trillion deep — and it’s only been the ability of government to conjure up more worthless paper, to temporarily push the final dead-end wall further out so to speak, that’s saved us from slamming into it already.

Is there anyone alive who seriously thinks we can continue this economic insanity for much longer? If THIS is not “teetering on the precipice of financial, social and political disaster,” then there’s no such thing.

Yet, instead of slashing our budgets as fast as we can to eliminate such debilitating dependencies and restore our financial integrity, we’re mindlessly jerking the spending throttles wide open … As if we still had any gas left in our tank.

Yep, it’s time we got a clue, alright … Because WE, the citizens of this once-great nation who have so foolishly asked the lying, plundering politicians to turn us into a shoddy, second-class “welfare” state, are the party that’s ultimately responsible … And we’re STILL electing these buffoons, instead of jailing them for dereliction of duty.

Predicting catastrophe, at this point, is about as difficult as foreseeing an egg’s smash when it’s already on its way to the floor — because anyone who uses their head for something besides a hat rack can see that the collision course we’re now on, is irreversible.

Should we immediately start braking, however, we can still control just where and how we crash … And on whether we’ll merely be busting a few bones, or splattering our guts out all over the bricks instead.

NOTE: This column was originally published in the Wyoming Tribune Eagle, under the title of “Local, State Leaders Keep Doing 90 MPH Down Dead End Street,”  on September 24, 2017. Here is this column’s original downloadable PDF file.