“No One Here Gets Out Alive”

Posted on February 20, 2017 by Bradley Harrington

“You and I get 76 trips around the sun and then we check out. The world spun before our arrival and it will spin after our exit. What will YOU have accomplished during the interval?” — Kenneth Royce, “Boston’s Gun Bible,” Second Edition, 2002 — 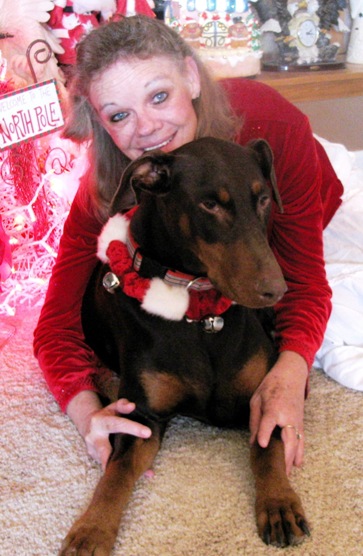 It was a pretty chilly night in the Pacific Northwest back in January of 2007, and my wife Barbie, daughter Kaitie and I were booking our way up the I-5 freeway to Shelton, Washington, to get a Dobie dog.

We’d gotten a male black-and-tan Doberman Pinscher a few months earlier, from someone who was moving and couldn’t keep him, and we all found the breed to be one of the most loyal and loving we’d ever owned.

So, naturally, Barbie wanted another — and she spent weeks looking for the best price she could find. Barbie finally located Dobie pups available for $450, less than half the going price at that time — and here we were, on our way to go check them out.

When we walked into the owner’s house, however, we knew right away that something was horribly, hideously wrong.

First off, the dump was a pigsty. And I don’t mean “cluttered” — that would have been the polite way to describe it — I mean there was garbage smeared on the walls and furniture, and the place stunk like an outhouse.

But all those thoughts vanished as we walked into the kitchen and watched a dozen pups scatter like cockroaches.

Barbie had been wanting another black-and-tan, but Kaitie had her heart set on a red. Barbie picked up a couple of the black-and-tans, but all they did was push away from her and struggle to get loose.

Finally, she picked up a red female and placed her in Kaitie’s arms — where the pup promptly fell asleep.

I had been looking the pups over as best as I could in the poor lighting. They all had distended bellies. I asked: “What’s the matter with these pups?”

“They just ate,” the owner said.

Well, Kaitie couldn’t take any more of it. “Mom, we need to go,” she said  — and her, the pup and Barbie headed for the door. I paid the owner, picked up her papers and got the Hell out.

We got back to Milwaukie late, and promptly fell asleep. The Dobie dog, now named “Mercedes,” weighing all of 7 pounds, slept between Barbie and I.

The next morning, things got really ugly.

When we examined Mercedes carefully, we found boils, pustules and other infections running rampant over her entire belly. The vet told us afterwards that this was because she had been lying in her own excrement. She had bruises all over her body as well.

The first time she went to the bathroom, she left nothing behind but worms, some of them more than 6 feet long.

The vet told us a couple of hours later: “I don’t think this pup’s going to make it.”

Well, anyone who knows Barbie knows that you just don’t tell her things like that.

Armed with de-wormers, antibiotics and a whole lot of love, plus batches of home-made chicken and rice soup they kept going for months, Barbie and Kaitie made it their mission to save that dog’s life.

And me? Of course I helped whenever needed … While I was harboring black thoughts of returning to that rat hole, rescuing all those appallingly-abused dogs, dismembering the owners with my bare hands and burning the joint right down to the ground. Some people are just not fit to live.

We settled for calling the American Kennel Club instead. They shut down that cesspool of a puppy mill a few weeks later.

And Mercedes? She survived, and became one of the greatest joys Barbie and I have ever experienced in our lives.

But not without scars. The first seven weeks of her life colored her forever. She trusted US because she knew we had rescued her, but that was about it. No one else could get within 10 feet of her.

Never in our lives have we owned a dog like Mercedes. So loving, so proud — and loyal like you’ve never seen. Her and Barbie were glued together at the hip. When she hit 100 pounds, she still slept with us. We compensated by getting a king-sized bed.

I’ll never forget watching Barbie and Mercedes together in Holliday Park a few years ago. When Mercedes ran, it was with the poetic motion of a fawn — but she’d always run back to Barbie, and walk there next to her as if she owned her. Which she did.

So, why all the gathering of wool? Because, just yesterday as of this writing, a couple of weeks after her 10th birthday, Barbie and I had to put Mercedes to sleep. Would you believe me if I told you that I loved that Dobie dog Mercedes more than I love most people?

That, no matter what disgusting, despicable depravities she experienced in the beginning of her life at the hands of hater-scum who deserve nothing but slow torture, she gave Barbie and I everything she had? That, as long as she breathed, she loved us like crazy and let us love her like crazy right back?

How many PEOPLE do you know who are capable of that?

But, riddled through her hind end with cancer and arthritis, Mercedes now had trouble walking and was down to just 70 lbs. There was just no way we could let her continue to suffer.

Knowing all of that, however, didn’t help much while Barbie and I held her and watched her suck in her final breath …  And I’ve been blubbering like a baby ever since.

Blubbering, and thinking … Of life, death, existence and just What It Is All About.

Here we are, Dear Reader — all of us together right here on Planet Earth. We don’t really know how we got here or where we’re headed. But here we are, and most of us have a fair number of years in which to … WHAT?

Human beings, unlike dogs, don’t have a guaranteed method of operation or survival. Animals have their instincts, but — for us — we have to determine who we are and how we’re to live.

Some “people” — like the puppy mill owners — spend their time whipping defenseless dogs. Others aim for a slightly lower rung on Hell’s ladder to become dictators, seeking power and control over millions of others.

I’d like to think most of us have better hearts — but, as I look around Planet Earth, I sometimes wonder.

What are YOU doing, Dear Reader, to support, enhance and defend YOUR life and values? Or the lives and values of those you love? Can you truly look in the mirror, right now, right into your own eyes, and tell yourself that you’ve done everything you possibly could to be an honest, productive, loving human being?

We don’t have forever, you know — and life is a very precious and fragile gift. Barbie and I, just like our Dobie dog Mercedes, will someday suck in our last breaths as well, because “No one here gets out alive.”

But, before we die, we’ll be what lives. And proud of it. And in style. That’s what our Dobie dog Mercedes taught us — and that’s a lesson we’ll be carrying in our hearts for as long as WE breathe.

NOTE: This column was originally published in the “Wyoming Tribune Eagle” on December 9,  2016. Here is this column’s original downloadable PDF file.