Why I Am Not a Republican

“There’s nothing in the middle of the road but a yellow stripe and dead armadillos.” — Jim Hightower, 1998 — 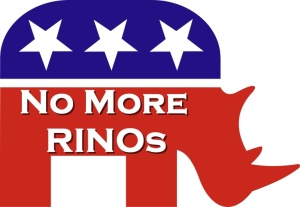 If you’ve ever wondered how it came to pass that the Republican Party, nationally, has evolved into disasters looking for elections in which to happen, our very own Laramie County GOP organization will give you all the clues you need.

But first, a little recent history on State Senate District 6 — where, in the Aug. 16 primary, Anthony Bouchard took out both Lindi Kirkbride as well as David Zwonitzer, current State Representative for HD 9, the latter by a mere five votes.

At that point, Mr. Zwonitzer’s wife, Kym, apparently in a digestive fit after having dined on sour grapes the morning of the vote recount, decided to make a run for the seat as an Independent candidate, bashing Mr. Bouchard in the process:

“’As opposed to my opponent, I like civility in the Legislature,’ she said, later adding, ‘I’m a rational person. … I feel he’s irrational.’” (“Kym Zwonitzer to challenge Anthony Bouchard for SD 6,” WTE, Sep. 7.)

And a few of the signers of that petition? None other than “Republican” County Commissioners Troy Thompson, Amber Ash and Linda Heath (along with her husband, Mike Heath, a committee chair for the LCGOP). And of course, Mr. Zwonitzer signed it too. Along with his and Mrs. Zwonitzer’s son, Dan Zwonitzer, currently posturing as a “Republican” in HD 43. Along with both Mr. Johnson and Ms. Kirkbride.

So, what do we have here?

Scandalous Action #1: Mrs. Zwonitzer gets on the ballot as an Independent, even though she has made it clear that her “credentials” are (allegedly) “Republican,” after her husband loses fair and square to Mr. Bouchard. Whatever happened to supporting the Republican nominee elected by the voters in SD 6?

Scandalous Action #2: So-called LC “Republicans” signing that petition, thereby throwing Mr. Bouchard under the bus. And I would ask those seven exactly the same question.

Apparently so. At least in the case of David and Dan Zwonitzer, their voting records speak for themselves. On the Wyoming Liberty Group’s 2015 Liberty Index, David ranked 45th out of 61, voting in favor of freedom a mere 29.1 percent of the time — while, on the 2016 Liberty Index, Dan took second-to-last place, ranking 60th out of 61, voting for freedom a whopping 5.7 percent of the time.

So, I think it’s fair to say that what we have here, in essence, is a bunch of RINO “Republicans” ganging up to try to take Mr. Bouchard out — because it’s obvious that the last thing they want is a REAL Republican making it to the State’s Senate floor. Or would at least one of you eight care to challenge that evaluation?

Now, I don’t want to be misunderstood here, so let me make it perfectly clear: All eight of you have the right to sign, support and say whatever, whomever and whatever you want. To claim the mantle of being a “Republican,” however, while you trash a Republican candidate whom you don’t happen to like is … Well, scandalous. Why don’t all eight of you just be honest for a change and sign up as Democrats, as that’s the party platform you seem to support?

And, finally, at the last LCGOP Central Committee meeting on Sep. 20 — which I attended, as my wife Barbie is a precinct representative — member Ted Mueller brought forth a resolution to censure those eight “Republican” posers for “conduct unbecoming a Republican.”

To which, LCGOP Chairman Jared Olsen (who is running for HD 11) fought tooth and nail (despite saying that he “didn’t want to influence the vote”) to stop the censure, because he was “afraid of its impact” on “critical” elections come November.

Well, Mr. Olsen, with the help of your fellow RINOs on the committee, you got that censure “tabled,” 17-12, until after the election (which qualifies as Scandalous Action #3.)

To which I can only wonder, with a great level of sadness: Where will we find your principles and integrity afterwards?

NOTE: This column was originally published in the “Wyoming Tribune Eagle” on September 30, 2016. Here is this column’s original downloadable PDF file.