“In any conflict between two men (or two groups) who hold the same basic principles, it is the more consistent one who wins.” — Ayn Rand, “The Anatomy of Compromise,” 1964 — 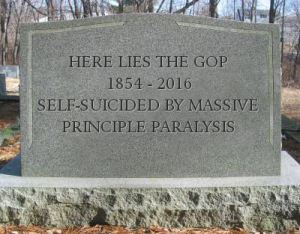 In last week’s column, I chastised Republicans for being “afraid of their own shadows” and stated that many have abandoned their “principles and integrity” in their attempts to win elections (“Why I am not a Republican,” WTE, Sept. 30).

This week, let’s look at just why that is the case, as this problem is actually systemic in its nature and has tremendous implications for the Republicans’ ability to govern.

■ To begin with, let’s examine some of the political positions taken by both Democrats and Republicans:

(1) Both parties advocate taxing some people to pay for the unearned benefits received by other people (since neither party supports the complete abolition of “welfare” transfer payments);

(2) Both parties support our tax-funded, collectivistic system of “public education” (since neither party is an exponent of the complete privatization of the schools);

(3) Neither party supports the absolutism of private property rights (since both parties uphold restrictions of one form or another on the manner in which individuals may peacefully use and dispose of their property).

■ Consequently, it is fair to say that both Democrats and Republicans alike share the same fundamental principles regarding our current “welfare” state — and, indeed, historically, on both the local and national levels, both parties have been architects in the creation and continuance of that state.

Thus, since both parties are essentially identical in their philosophical premises, the differences between them merely consist of the degree to which those principles are advocated or implemented. With, historically, the Democrats pushing for more controls and the Republicans pushing for less.

If it’s good to turn a city, county, state or country into a second-class “welfare” state, however, why not do it whole hog? Why mess around with a half-measured approach?

That’s no problem for the Democrats, since that’s precisely what they promote. For most Republicans, however, that presents a bit of a problem, since at least some of their principles also contain a (small) measure of respect for freedom, individualism and property rights.

■ Which means: The Democrats — while being completely wrong — are at least consistent to their own principles. The Republicans, on the other hand, are conflicted in theirs.

Opposite principles, however, cannot exist for long in the same man or the same society, and the logic of both ideas and events will draw such a person or group of people inevitably towards one side or the other.

And, in the process of that struggle, the price a man or a society pays for that conflict is to imbue themselves with an aura of moral cowardice when it comes to challenging their more consistently-armed opponents.

■ THIS is why most Republicans have no guts: Implicitly or explicitly, they recognize the clash that exists in their own outlook, the inconsistencies inherent in their own philosophy, if you will —  and are therefore paralyzed when it comes to challenging the imposition of the greater political control advocated by the Democrats.

(1) Once the principle is accepted that even one cent of a man’s earnings belong to “society,” what leg do the Republicans have left to stand on when the Democrats say that should be 60 cents out of every dollar instead of only 30 cents?

(2) Once the principle is accepted that the state has the “right” to regulate the economy beyond the obvious protections against force and fraud, how are the Republicans to respond when the Democrats say that should include Fannie May, Freddie Mac, Frank-Dodd and “anti-trust,” not merely the Federal Reserve?

(3) Once the principle is accepted that government has some kind of “role” in “providing” for people beyond protecting their private property rights, how are the Republicans to fight measures of enforced health insurance, mandatory minimum wage laws and “equal opportunity” in the workplace, not just Social Security?

Now you can see where the spineless “me-too-ism” of the Republicans comes from — and that devolution will continue, accelerated and unabated, as long as the Republicans continue to hold to their opposing principles simultaneously.

■ The answer to this dilemma is obvious: The Republicans must wipe the inconsistencies out of their philosophy and either become full Democrats — or reject the moral and political fundamentals of the “welfare” state completely, proudly proclaiming their allegiance to the principles of liberty and individualism as outlined in the “Declaration of Independence” instead.

And, unless and until that happens, Republicans will be hastening, not preventing, the collapse of a once-relatively-free society into an eventual totalitarian state.

NOTE:  This column was originally published in the “Wyoming Tribune Eagle” on October 7, 2016. Here is this column’s original downloadable PDF file.